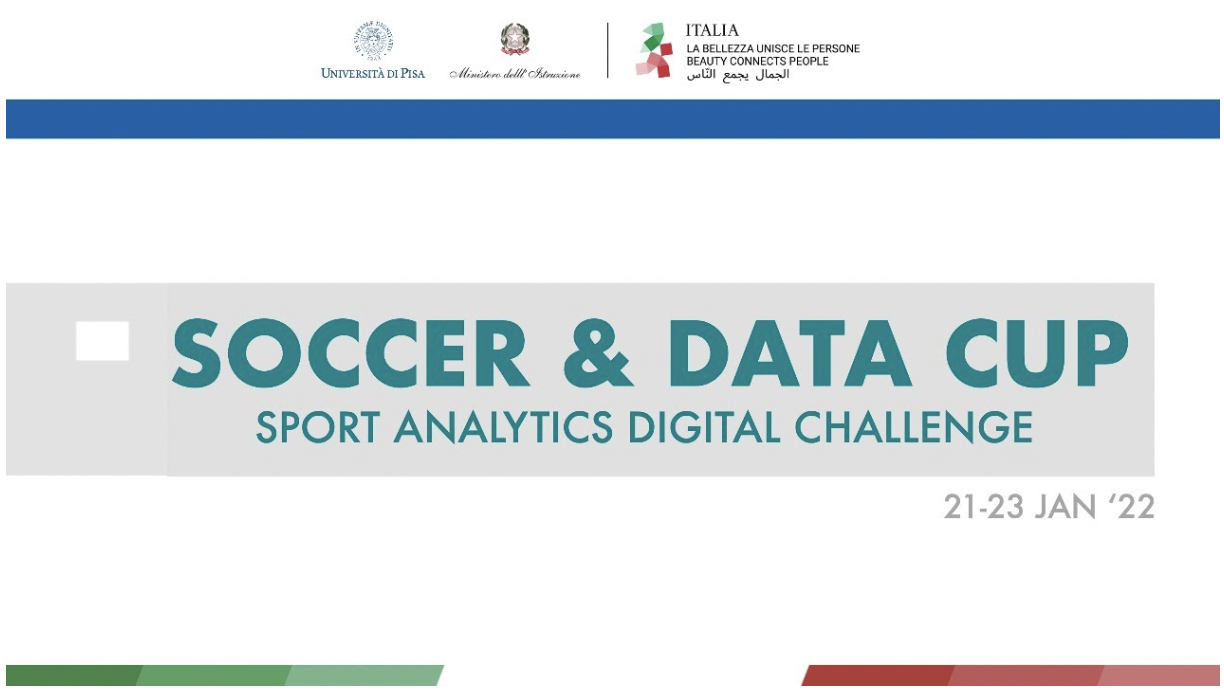 Soccer & Data Cup at Expo Dubai 2020 has been a 3-days international hybrid marathon of Sport Analytics combining fundamental techniques of data analysis and Artificial Intelligence. The event covers the subject area of Data Science, and aims to raise young people's awareness to the new frontiers of the complex analysis of digital data in the sport area. The students, with the help of Sport Analytics experts from University of Pisa (Department of Computer Science) and National Research Council of Pisa (Institute of Information Science and Technologies), found themselves immersed in a digital co-design competition using sports data of games from the five major European leagues of male football. After three days of work, in which the participants combined fundamental techniques of data analysis and artificial intelligence with sport, the students presented their projects to a jury called to choose the best team.

The challenge saw students from eight Italian and two Emirati institutes compete in a hybrid sports marathon. The challenge of this competition was focused on finding out if the commonplaces related to the world of soccer are true or false. The work of the Sicilian institute obtained the gold medal, while the silver and bronze medals went to the Istituto della Bassa Friulana in Udine and Fulcieri scientific high school in Forlì, respectively. The Daniele Crespi High School of Busto Arstizio, the Rita Levi Montalcini Institute of Acqui Terme, the New York University of Abu Dhabi, the Giacomo Leopardi High School of Macerata, the Volta Institute of Pescara, the Ovid Institute of Sulmona, and the Al Khalil International Private School in Al Ain, was the other actors of this innovative competition.

The winners analyzed the modern goalkeeper showing that goalkeepers move more off the posts than in the past, participates more in the actions of his team and is truly the eleventh man who can make a difference. Among the other teams, there are those who have shown how the intensity of play in a derby is greater in Spain and France, but lower in Italy compared to a normal championship match. One team found that more ball possession really correlated with a higher chance of winning, but only if the team is really in good harmony. Others found that a shorter attacker is not necessarily stronger.

The winner was announced by the general commissioner for Italy at the Expo, Paolo Glisenti during the final ceremony in the Accademia area of ​​the Italian Pavilion. With this initiative, "students have had the opportunity to learn more about the field of data science with a combination of schools and universities, which we believe is the future and in which we are investing a lot as a university" (Paolo Ferragina - Vice Rector for Informatics of the University of Pisa).

Intems in the Catalogue

SoBigData.eu receives funding from the European Union's Horizon 2020 research and innovation programme under grant agreements No. 654024 and 871042
The views and opinions expressed in this website are the sole responsibility of the author and do not necessarily reflect the views of the European Commission.

SoBigData.eu is licensed under a Creative Commons Attribution 4.0 International License